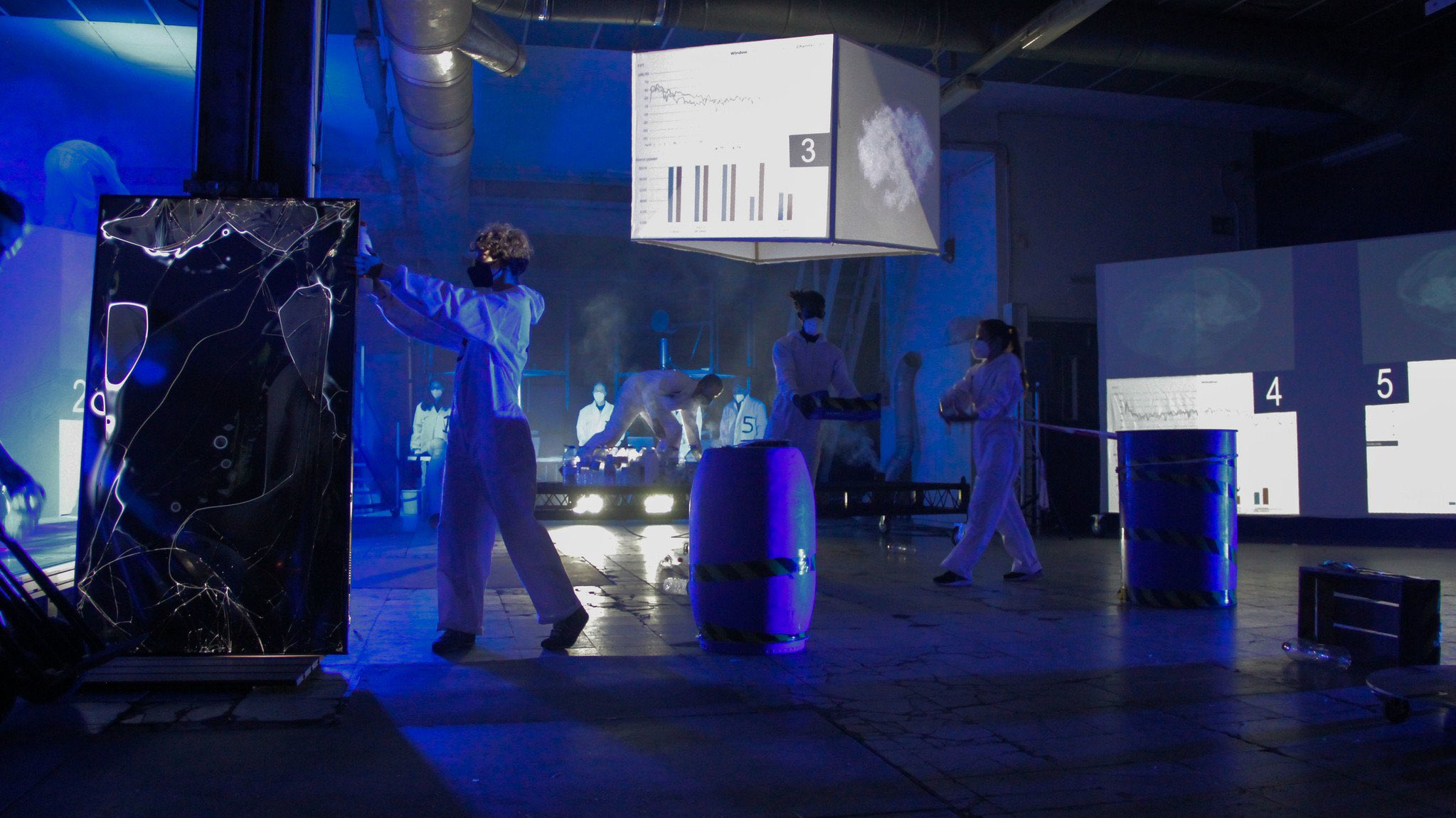 Around four months ago, researchers from Aix Marseille University invited us – the CoBra ESRs – to participate in the European Performing Science Night in Badalona, Spain. This night was part of a Europe-wide event that gave us the chance to talk about Cobra with the public, as well as a chance to collect data. What we did not expect, was that this would end up with us performing in a theatrical performance.

Four of us said yes to this great opportunity. In preparation for the European Performing Science Night, Fundació Èpica invited around 30 people from around the world to create an interactive performance centred around seven scientific topics inspired by the research partners of the event, including us! The performance was made interactive by the Kalliópê app on the audience members’ smartphones, which allowed them to interact with the actors and stage props throughout the event.

While we were looking forward to seeing the development of such an innovative artistic and scientific event, we were mainly interested in collecting experimental data during the two weeks leading up to the European Performing Science Night. The thirty performers, who were strangers before, were sure to grow closer over the course of these very intense two weeks. This unique situation lends itself to experiments that look at the evolution of interaction between people as they become more and more familiar with one another. Usually, it would be hard to control the amount of interaction between two people. However, this intense workshop provided a well-controlled environment, in which the participants barely had the chance to interact with anyone outside of the group. We hoped to gain insights into how close collaboration for two weeks alters one’s language use and brain. To this end, we gathered data across several modalities (audio, physiological and neurological) which we are eager to analyse. We will be sure to keep you posted on the results!

Now, onto the part on how we somehow ended up being in the actual performance. During those two weeks, we were supposed to primarily focus on doing research and help the performers learn about neuroscience and linguistics to incorporate it into their performance. However, two days before the performance, the directors asked us to play the roles of the evil scientists (see left image) who steer the actors in a scene with their brains. To this end, we used the brain visualization tool of Emotiv (the same EEG system we used to gather our neural data, see right image) and ‘lit up’ our brains in synchrony with the actions of the actors we controlled (follow this link to see the performance).

As fun as being a performing artist for a day was, our real time to shine was on Saturday, during the EPSN science fair. We had a stand in the European Corner, where we talked to passersby and their children about the benefits of pursuing higher education in science. As an added bonus, we also let them see their brain signals using the Emotiv brain visualization tools. At last, we gave a short presentation about CoBra and the experiment we conducted in Badalona on the main stage of the event. You can find the video of our talk on Youtube (Note: the presentation was held in Spanish).

We would like to thank Fundació Èpica for the organization, as well as Clément François for setting up the collaboration and his mentorship along with Philippe Blache, and Thierry Legou of Aix Marseille University. Thank you also to Marie Sklodowska-Curie Actions for initiating and supporting European Research Night events all over Europe, giving us the platform to communicate our research to the public.